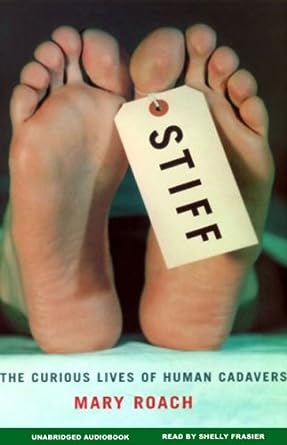 Even Roach's digressions and footnotes are captivating, helping to make the book impossible to put down. Agent, Jay Mandel.

Forecast: Do we detect a trend to necrophilia? Two years ago it was mummies; in the last few months we have seen an account of the journeys of the corpse of Elmer McCurdy and a defense of undertakers; and now comes Roach's disquisition on cadavers.

But death is, after all, a subject that just won't go away. View Full Version of PW.

I briefly imagined that he would be shown to students or something and his organs examined to show the correlation of his health prior to the contraction of the flu and his death. Roach begins by taking us with her to observe a group of plastic surgeons practicing on decapitated human heads in disposable roasting pans. Another use of bodies willed to science is that of crash-test dummy. The bodies are used to test how many pounds of pressure the human body can withstand before severe injury or death occurs the death in question is, of course, not of the cadaver being tested.

Interestingly, the brain is one of the first organs to dissolve, being located conveniently close to four of the major apertures of the body, as well as being soft and easy for bacteria to digest. Would you like a side order of something with that?

Stiff: The Curious Lives of Human Cadavers by Mary Roach

Mary Roach has a ton of them, for example the medical school in Maryland where the heads of "decedents" the preferred term are chainsawed off to be set in roasting pans and used by trainee face-lift surgeons to hone their skills on. Warning: this chapter contains scenes that some readers may find disturbing; as does the one about recently deceased crash test dummies being beaten to a pulp to test the limits of human impact tolerance; or the one about the "crucifixion experiments", where corpses were nailed to crosses in an attempt to prove the authenticity of the Turin shroud.

In fact, pretty much the whole book. Twelve years ago, Bill Buford arranged an introduction to the pathologist whom Ian McEwan consulted for the cut-up scenes in The Innocent, so that I could attend a double post-mortem and write about it for Granta. The pathologist told me that McEwan had been offered the same opportunity, but had declined.

Maybe I'm just getting squeamish with age, but I found reading this book a lot more unsettling than that experience. Actually, I think it has something to do with the style. Roach writes for Salon and Wired, and it shows: excellent first-hand reportage and meticulous documentation, but also a mass of educational factoids gleaned from the internet and secondary sources, plus worst of all endless failed attempts to lighten things up a little with facetious humour of the Bryson variety.